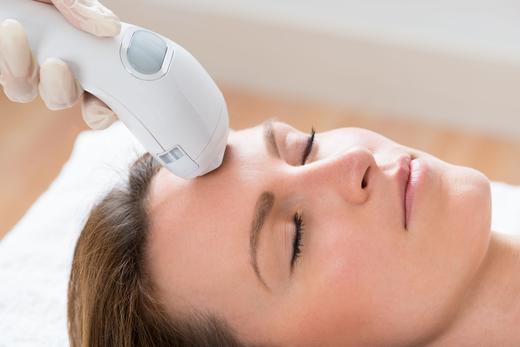 If you clicked on this hoping for an article about the Indian Premier League, this probably isn’t for you. For when we talk about IPL, we’re thinking less glowing trophy, more glowing face! So, what exactly is the non-sporting version of IPL? Allow us to explain:

As its name would suggest (Intense Pulsed Light), IPL is a type of light therapy dermatologists and beauty therapists everywhere are using to treat skin, spots and unwanted hair. In short, it is the perfect treatment for skin rejuvenation – especially as it is also responsible for boosting collagen and elastin production.

Pigment cells in the skin absorb the light energy, which is converted into heat. The heat then destroys any unwanted pigment – or hair follicles – to clear up freckles, dark patches, age spots, sunspots, birthmarks, visible capillaries, rosacea, scars and unwanted hair in a broad yet targeted fashion – thanks to its ability to filter the wavelengths without harming the epidermis. A quick, easy, non-invasive, non-ablative and relatively painless procedure to give your skin a boost? Yes please!

Let’s break this down into the three main areas we will be treating when we perform IPL!

Want clear, glowing skin? IPL is for you.

When we say pigmentation, we’re talking about what happens when an excess production of the skin pigment, melanin, is produced, resulting in a whole host of unwanted patches. Perhaps not surprisingly, therefore, it is a condition affecting a large proportion of New Zealanders, in one shape or form – especially when you consider the high UV in our gloriously sunny country, as well as the fact that from the age of about 40, skin finds it harder to regenerate on its own.

Thank goodness, then, for IPL – a non-invasive, long-term solution to pigmentation problems – both brown and red. The result? A clear, radiant, even skin-tone – free from redness and blemishes.

If you’re not familiar with spider veins – or, if you want to get really technical, facial telangiectasia, you’re in luck. For many, however, they are a daily nightmare.

In short, they develop when the walls of blood vessels that lie close to the surface of the skin weaken and expand, meaning they become more visible – never a good look! They commonly appear in areas that are most exposed to the sun, such as the side of the nose, cheek and chin, and are triggered by things like sun damage, hormonal changes, rosacea, trauma and harsh skincare treatments, but you may also have a genetic predisposition towards them.

There are currently no over-the-counter treatments, which is why the safe and effective IPL is such a godsend – especially when you consider that the only other option is surgery.

The treatment uses selective photolysis – meaning the light only burns the affected capillaries, without damaging the surrounding skin. Once the unwanted capillaries are burned, your body will naturally dispose of the dead material within a couple of days while new skin cells are simultaneously generated.

Most people will suffer from acne at one time or another, and for the majority, it will clear up on its own – perhaps with some help from a good skincare regime. There are those, however, that may need some extra help – especially as over-the-counter treatments are just not effective enough – and that’s where IPL comes in.

In fact, IPL can be used to treat both active acne and acne scarring, making it an all-round effective and revolutionary treatment for unwanted, confidence-crippling pimples. Using targeted light waves, IPL will not only kill the bacteria behind acne but will also help treat the associated inflammation – as well as any resulting scarring.

Often dubbed the ‘lunchtime procedure’, it’s as quick, easy and painless as popping to the café for a quick bite to eat.

No disrespect to the Indian cricketeers or anything, but the only IPL winner in this story is you.

The post What is IPL? appeared first on Lovoir Beauty.

PrevPreviousThe benefits of plant actives in skincare
NextWhat’s the deal with … Microneedling and scars?Next

Waxing vs. Laser Hair Removal: Which is Better?

Does IPL Skin Rejuvenation Help Get Rid of Acne Scars?

Be the first to hear about new treatments & events.